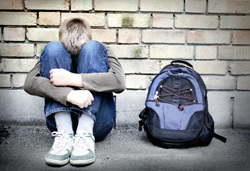 Touted as one of the richest counties in the country, it is easy to assume that Loudoun’s youth have secure housing situations. Yet during  the 2011-2012  school year Loudoun County Public Schools identified 785 children and youth as homeless or “precariously housed.” That number has tripled since the  2008-2009 school year.  It is likely there are many more precariously housed and at risk youth  living in Loudoun County who have not yet been identified.

How do we define homeless children and youth? Under the federally funded  McKinney-Vento Act, homeless children and youth are defined as “individuals who lack a fixed, regular, and adequate nighttime residence.”  In other words, these kids sleep in cars, abandoned warehouses, bus stations, park benches or “couch surf” among their friends. Nearly one in four f these young people do not have a guardian or parent in their lives.

The causes of homelessness can be complex. The most common reasons for homelessness involve domestic violence, chronic substance abuse, chronic health problems and mental illness. The lack of affordable housing in Loudoun County also plays a role. Many families have to double-up in their living arrangements for financial reasons.

While there are no simple solutions to homelessness, organizations within Loudoun County are making a difference on multiple fronts. Loudoun’s Continuum of Care – a community coalition of public, non-profit, and faith-based organizations – provides a variety of shelter and support services to children and youth who are homeless or at risk of becoming homeless. Continuum of Care’s overarching goal is to ensure that there is a continuum of services to meet the needs of homeless persons in the community. They do this by collaborating with established charitable organizations such as Volunteers of America, INMED, Good Shepherd, and LAWS.